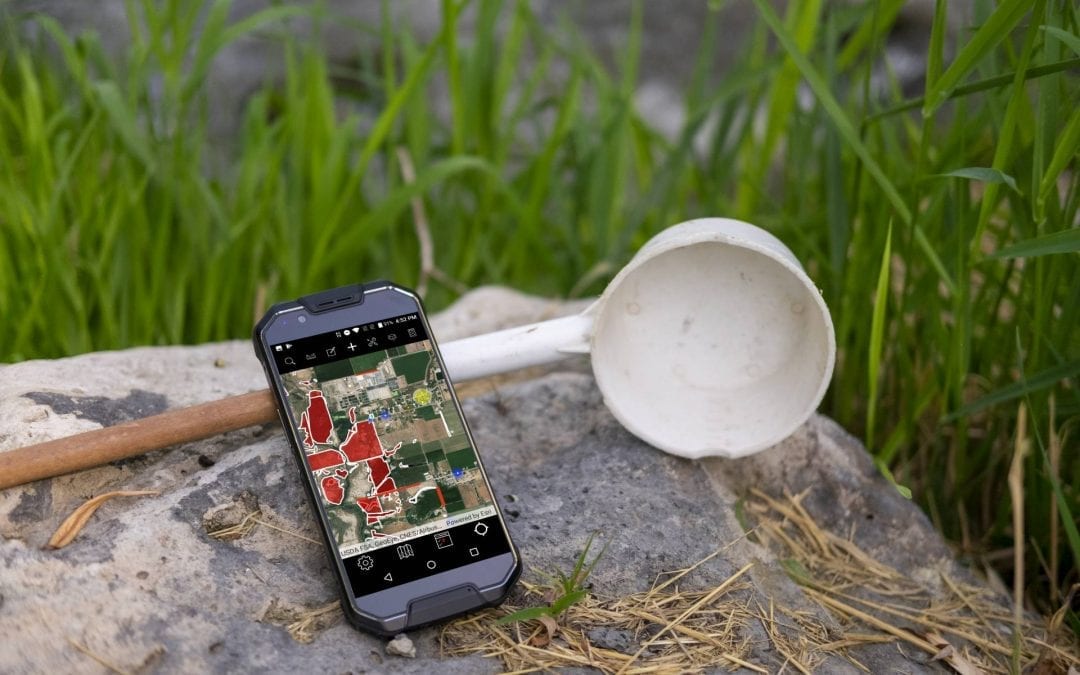 Our November 2019 release of the FieldSeeker cross-platform mobile app (CPMA) is the biggest update yet!

Many of the changes are “under the hood” to make the app more maintainable, more responsive, and easier to enhance.  Since first developing the app and releasing the first cross-platform build more than a year ago, we’ve taken hundreds of points of feedback from dozens of customers, fixed lots of bugs, and added various enhancements.  24 builds later, we have a pretty good idea of how best to organize the app for easier maintainability.  Having 24 app updates in a year is a direct result of close customer interaction.  In our first year with the new FieldSeeker release, we had between 25-30 districts using the new version, plus several other beta testers and potential customers doing trials.  Our first release of the original FieldSeeker GIS took a few seasons to have that many users, and so did our first releases of Sentinel GIS modules back in 2007 – 2011.  With our latest FieldSeeker, what took several years in past software releases was accomplished in a single season.  We appreciate the communication and support of all those that came along with us on the journey!

FieldSeeker CPMA is available on the Microsoft Store, iOS App Store, and Google Play Store.  We haven’t had an update on the Play Store since June due to 64-bit requirements which could not be met with the version of the ArcGIS Runtime that we were using.  We are now using the latest Esri Runtime, so we can again post updates to the Play Store.

Most of our users are using either the Juniper Mesa 2 Windows 10 tablet (or the new Mesa 3 which is basically the same unit with more memory and a faster processor) because they also use it for truck spray tracking using our Windows ULV software, or they’re using an Apple device (iPhone or iPad), and an increasing number are using rugged Android devices such as the Cedar Tree CP3 phone or CT8 tablet, with a variety of other phones, tablets, and laptops also in use in the field.  If you are using a device that isn’t listed on our Approved Device List, please contact us and let us know about your experience.  We can list it there and provide other potential users a heads-up.

Field users gave us a bunch of suggestions for improving the data entry experience.  We’ve tried to incorporate all these suggestions.  For example, the Site Visit form shows labels such as Habitat and Container in bold, line separators for multi-select check boxes. 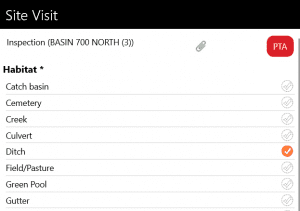 Form titles and data presentation has been subtly improved for easier readability. 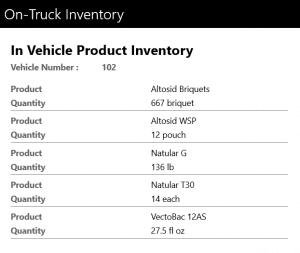 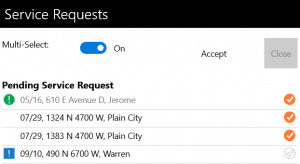 Our mobile app uses the Esri Runtime SDK for .NET (Xamarin Forms).  We develop our mobile app using Xamarin so that it can be built for Windows UWP, Android, and iOS.  We had been using Runtime 100.1 due to some Esri runtime bugs in later versions which prevented us from upgrading to later versions.  At Runtime v100.6, Esri product managers worked with us on a solution to one of the blocking issues so that we were able to go ahead and update our project.  To make a long story short, the Esri hosted feature service now supports using shared domains, and the ArcGIS Online user interface for editing domain lists will eventually reflect that better.  What that means in everyday language is that lists such as Habitat can be shared everywhere in the feature service, rather than each Habitat list being independent (a separate one for Point Location, Line, Polygon, Trap, etc.).

This 100.6 update opens up a lot of things for us including: 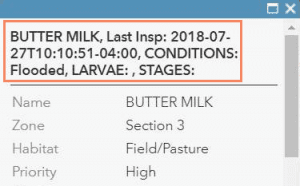 We intend to make use of Arcade to make the history display more informative.  Instead of just seeing the date and technician, what if you could see the inspection results, species identified, and whether a treatment had been done? 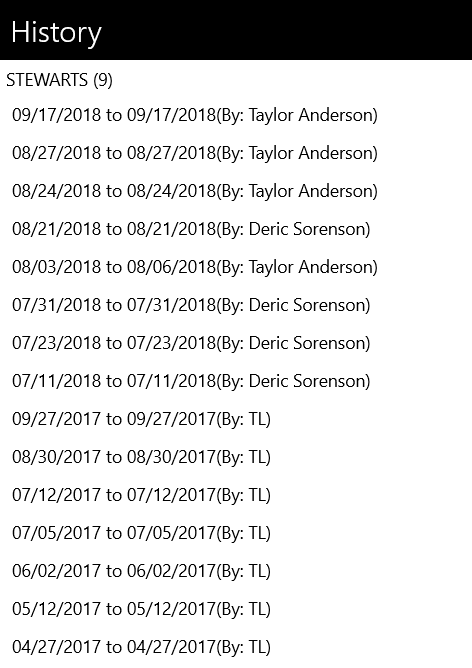 These changes haven’t been made yet, but now that we’ve updated to Runtime 100.6, we can, and they’re on our roadmap.

All previous versions of CPMA have supported offline data collection, but they’ve used what Esri calls the “on-demand offline workflow”.  What this means is that whenever a mobile user on any device would attempt to download an offline area (if it had not already been downloaded to the device previously), the app would send a request to the Esri servers to package up the data and the imagery basemap, then when that was finished, it would download the package.  So if you have 10 field users downloading 10 areas, that’s 100 separate requests to the server.  If a user gets a new device, they have to repeat the download process, and each time that is a separate set of requests to the server.  On the back end, each time the request is made, a feature service replica is created.

This had a number of disadvantages.  First, it’s slow.  Second, it’s inefficient to request the same thing from the server a bunch of different times.  Third, the imagery basemap can be a huge file, and there are Esri limitations on how much you can download at any given time, which means you had to define smaller areas in the Offline Map Areas layer.  Fourth, and a related point here, the imagery basemap always ends up being a rectangle covering the extent of the offline map area, so it’s often larger than it really needs to be.  Fifth, you can’t easily specify the level of detail that you want to include (this is hard-wired in the mobile app, and can only be changed by manually changing a configuration setting to specify the basemap zoom level before downloading).  Last, our implementation of offline data didn’t allow you to use a different basemap if you wanted to.

So what’s the difference with the Pre-planned Offline Workflow?

2. As part of the workflow of defining the offline map areas in ArcGIS Online, you can define the level of detail and how often the data package is automatically updated. 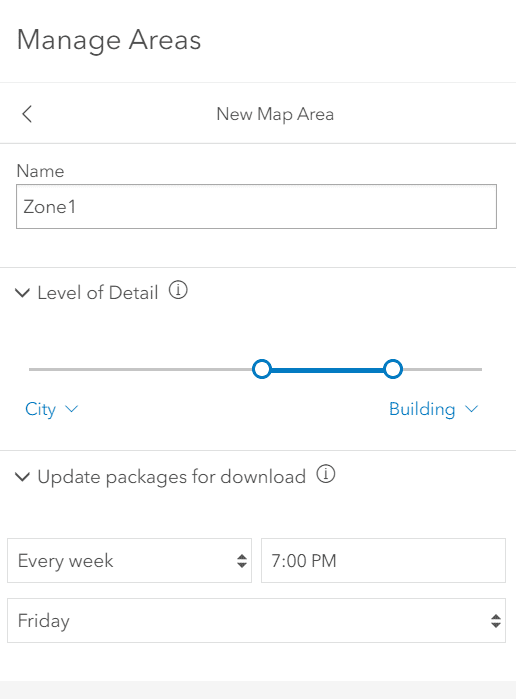 As the tip explains, this means that FieldSeeker data will be automatically refreshed in the downloadable data package, so if anyone gets a new device and downloads the data, it will already be reasonably up to date, and they’ll just have to sync changes to get recent updates.

3. When the data is packaged up by ArcGIS Online, it’s packaged up once, and then anybody that needs to download it just downloads the data package that already exists. The mobile app workflow works the same for them, but it’s not sending a request to the Esri server every time to create a new package, it’s just downloading the one that’s there.  You can see how big the package is by clicking on it in ArcGIS Online after it’s created. 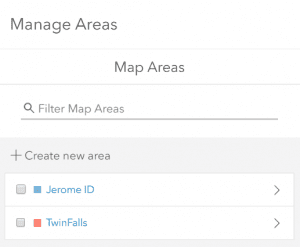 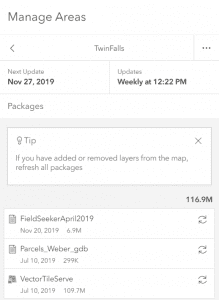 4. You can use other basemaps besides the imagery basemap, including all the Esri “vector tile” basemaps such as Streets, Topographic, Navigation and others, and your own organizational basemaps if they exist (they must be in Web Mercator (auxiliary sphere) spatial reference). These basemaps are much smaller in size and can cover a much larger area at a higher degree of detail, so if you don’t need imagery in the field, go into your Webmap and change the basemap that is being used. 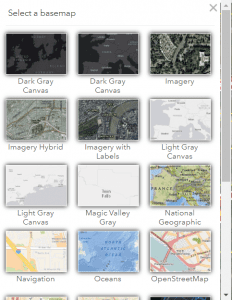 5. If you use one of the vector tile basemaps, your offline map area can be a polygon with any shape that fits your area. (If you use Imagery, the area must be a rectangle.)  That can also greatly reduce the size of the data that is downloaded.

6. Download times are faster than with the “on demand” workflow. (They are still not great.)  For example, on a relatively average cellular network with 70 Mbps download speed, the above Twin Falls package which is about 116 MB takes about 3 minutes.  That’s obviously longer than it would take to download a 116 MB file from a Website somewhere, but bear in mind the Esri servers where packages are stored for download are shared by many services, and performance precedence is given to the services themselves over downloading pre-packaged data.  What we don’t have to wait for is the package to be build on demand before downloading it.

Many of the other refactoring changes that have been made under the hood are for our benefit moving forward to make the app more easily maintainable.  We’ve centralized code, removed redundancies, cleaned up how app properties and configurations are loaded and retrieved and how user entries are saved when going from one screen to another, and addressed all the remaining bugs and issues that we knew about.  All in all, this major update should provide a more stable and performant user experience.

If you are interested in seeing a demo or purchasing the software, Contact us today for information and pricing.  Your purchase comes with one year of included software maintenance, so you’ll receive updates as they are made available.  We have lots of exciting things planned so don’t miss out!