Connecting with the Public Through Email Notifications 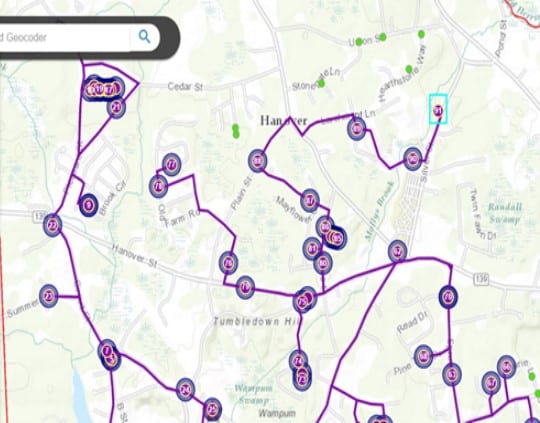 Last year, Frontier Precision had the opportunity to work with Central Massachusetts Mosquito Control Project (CMMCP) to implement an email notification system for people who enter a service request for truck spraying.  This email notification project was added on to already existing software and processes to increase the efficiency of communication to members of the public that enter service requests.

CMMCP has a membership of 42 communities in Worcester and Middlesex counties.  During the mosquito control season (roughly Memorial Day through Labor Day) they field upwards of 18,000 service requests from the public through an online form or through phone calls to the office.  Traditionally, technicians would notify these individual properties in person in the afternoon prior to applications later that night.  That became more problematic as the volume of requests increased, leading to service delays and process bottlenecks.   That was what prompted the email notification project.

CMMCP had been using the Frontier Sentinel GIS for Mosquito Control software for a few years, but last year they significantly enhanced their technology usage.  They purchased new Windows tablets for field operations, but they also adopted some Esri ArcGIS® Online workflows that a neighboring project, Plymouth County Mosquito Control Project, had been using for capturing and scheduling service requests.  CMMCP implemented an Esri GeoForm on their public Website for capturing service requests, as well as an internal Esri Web application built using Web App builder for capturing requests that came in over the phone.  They also implemented the Esri Routing analysis workflow to generate routes and stops for all those thousands of requests, which we then integrated into Sentinel GIS using Python scripts.  Every day, drivers and supervisors use an Esri Web app to review open service requests and create routes from them.  Then automated scripts pull the data into Sentinel GIS for use in the field when doing truck spraying.  After spraying is completed, the next day drivers review what was completed and close out the requests.

The email notification project added on to this by automatically notifying residents of the following things:

We used Amazon SES (Simple Email Service) because it allowed us to configure customized message templates, it had a developer API (application programming interface) that we could integrate with our software and data in Sentinel and ArcGIS Online, it was almost free (it cost CMMCP a few dollars for the whole season), built-in analytics monitoring bounce-back and other conditions, and most importantly the ability to send thousands of emails per week or even per day without getting black listed as a spammer.

CMMCP reports that the email notification system was wildly successful on many levels.  Frank Cornine writes: “The first most obvious benefit was that field technicians were able to complete more applications each evening, and in turn requests were treated in a much timelier manner compared to previous seasons.  Another added value was in the amount of additional mosquito control activities that were now able to be completed in lieu of the in-person notifications.  In particular, additional catch basin treatments were now able to be performed most afternoons prior to adulticiding.  CMMCP ended the 2018 season with a record number of catch basin treatments, due in part to these email notifications.  The additional points of notification were in themselves another benefit to the new system, as residents were more informed about the status of their service requests.”

One question that came up during these projects is whether notifications can also be sent using SMS (text messages) or push notifications (to an app on a SmartPhone or tablet).  We supported email notifications only in these projects, primarily because text notifications would require capturing the customer’s cell phone number and possibly cell carrier such as Verizon, T-Mobile, etc.  However, Amazon also has a SNS (Simple Notification Service) which does support text notification as well, and we’re looking into how to support that in future projects.  Push notifications require an app to push to, and we do that in the case of our Public Notification App – but that requires deployment of branded mobile apps to the Apple App Store and Google Play Store, a customer subscription service, and some management processes to trigger the notifications.

How to Implement Email Notifications

If you are interested in implementing email notifications in your operations, please contact us today for information and pricing.  We can add this on to any system, whether that’s one of our Mosquito GIS software solutions, or some other solution.