When an application for GNSS requires highly accurate relative elevation readings for a set of features, we often think of fairly traditional surveying techniques and equipment like survey-grade GNSS systems, total stations, or even the old hand level with a stadia rod.  But when that structure is way out in the boondocks far from any CORS station and outside of any VRS or real-time differential GNSS network, and when the desired operators of the system are not trained in land surveying, these traditional methods may be costly and overwhelming.  This was just the case for one of Frontier Precisions’ customers, a dam safety group within a state agency tasked with measuring elevations on dams throughout the state as part of their routine inspection protocol.  The system they selected, a Trimble Geo 7X Centimeter Edition as a rover unit and a Trimble NetR9GNSS reference receiver as a portable base station, will allow a single operator with no surveying experience to simply and efficiently collect field data, then postprocess the data in order to achieve the accuracy they require.

The dam safety team monitors dams of all sorts throughout the state from small earthen dams on private land designed to retain just enough water for a single landowner’s ranching operation to large hydroelectric dams which create reservoirs to irrigate an entire valley.  Each dam is inspected every 2-5 years and part of that inspection includes a survey of various points on top of and around the dam structure to determine whether or not the dam is settling, which may indicate structural deterioration or safety hazards.  In the past the survey had been done using a level and stadia rod method and hand drawing a diagram for their records.

The group had two main requirements for a system, (a) they needed vertical precision to be within +/- 0.1 ft, and (b) they needed repeatable accuracy over time.  The challenge for a typical resource-grade mapping system was that many of these dams were located in remote areas where any type of real-time Differential GNSS correction source would not be available and any permanent base station for postprocessing had too long of a baseline (i.e. was too far away from the job site) to provide an accurate vertical position.  The budget required to hire a surveyor or to acquire a total station or GNSS surveying system and associated training was not feasible.  However, Frontier Precision helped them identify a less costly and easy-to-operate GNSS mapping system, a Geo 7X Centimeter kit and a NetR9, which would allow them to achieve their goals of high vertical precision even in remote areas.

To test the viability of the proposed system, Frontier Precision performed a field test at a hydroelectric dam near its headquarters in Jerome, Idaho.  The test was not designed to be a statistically robust scientific study, but it was designed to demonstrate a real-world application of using the technology similar to how the user would.  Frontier Precision visited the site on two different days with the same equipment and collected points at a three similar marked locations.  The general work flow went as follows:

Among 38 points collected, all but one point were well within the +/- 0.1 ft specification at an average of 0.03 ft at 68% confidence and 0.1 ft at the 95% confidence interval.  The one point that did not meet that specification was on the northwest side of a metal grate around the inlet of the dam, adding interference and restricting the view of satellites, and it still came within 0.12 ft vertically.  All points collected on the crest, face, spillway, and even the weir at the base of the outlet of the dam (which was set deep in the canyon against the canyon wall and with lots of vegetation surrounding it) were within the desired +/- 0.1 ft specification for precision. 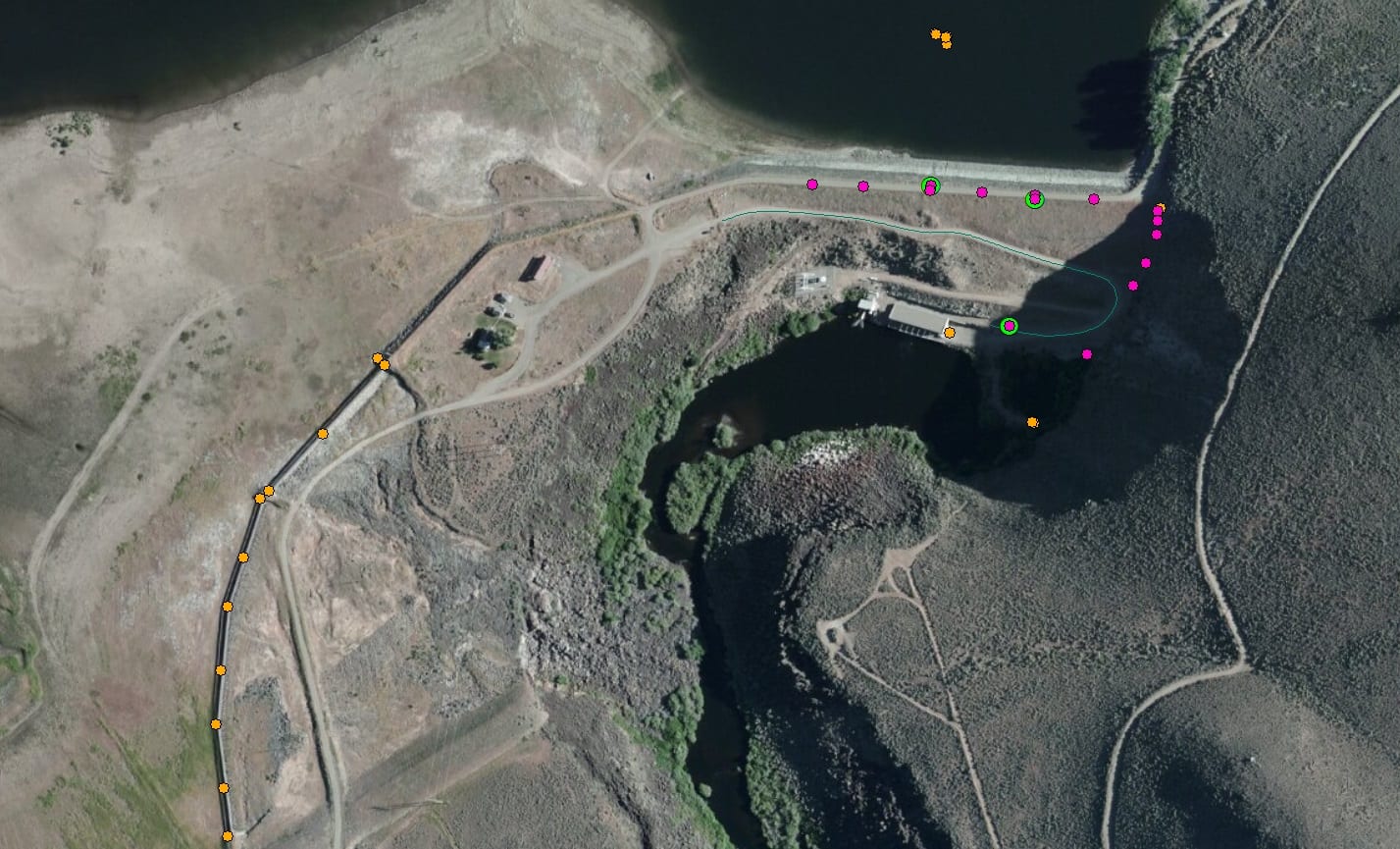 Three features were collected on both dates to measure repeatability over time.  Below is a table of the results on these points.  Elevation measurements are in feet.  Reported vertical precision values are reported at a 68% confidence interval.

Among the three features collected on both days, the difference in elevation readings ranged from 0.002-0.02 ft, well within the +/- 0.1 ft specification required.

In the end, Frontier Precision helped the dam safety team identify a solution that would allow a single operator to more quickly, more accurately, and more efficiently measure elevations on dams during their inspections.  Now a crew of one can do what used to be done by a crew of two in a fraction of the time, the data is in an electronic format instead of pen and paper, and they are using software and a work flow they were already familiar with for other applications, not to mention they stayed within their budget.  This will provide more accurate and more consistent data which in turn improves safety and, as a bonus, it will save the agency tremendous amounts of time and money over the lifetime of the system. 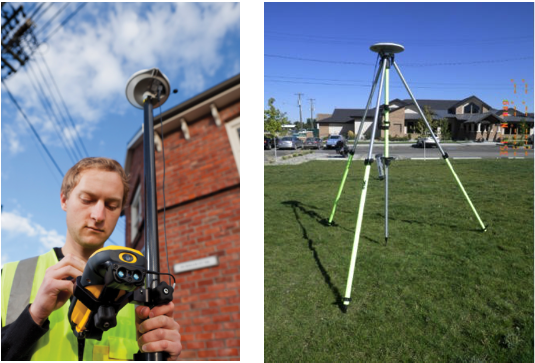