Performing underwater inspections of critical infrastructure items has historically been difficult and expensive. Critical Infrastructure may include dams, piers, bridge pilings, pumps, and submerged pipelines, and in the past has involved teams of divers and/or repetitive movement of cabled underwater cameras. Much of this work can now be performed easily and inexpensively with submersible drones, providing real-time images to a linked cell phone or tablet and taking high-resolution video (4K and 1080 P) and 12 mega-pixel photos for later review and analysis.

Frontier Precision is aligned with Chasing Innovation to bring submersible drones to our water resource inspection and survey partners. Chasing innovation has three levels or grades of drones with varying capabilities and price points: the Dory, Gladius Mini and the M2 Professional Series.  This article will cover the features and capabilities of the Mini and M2. 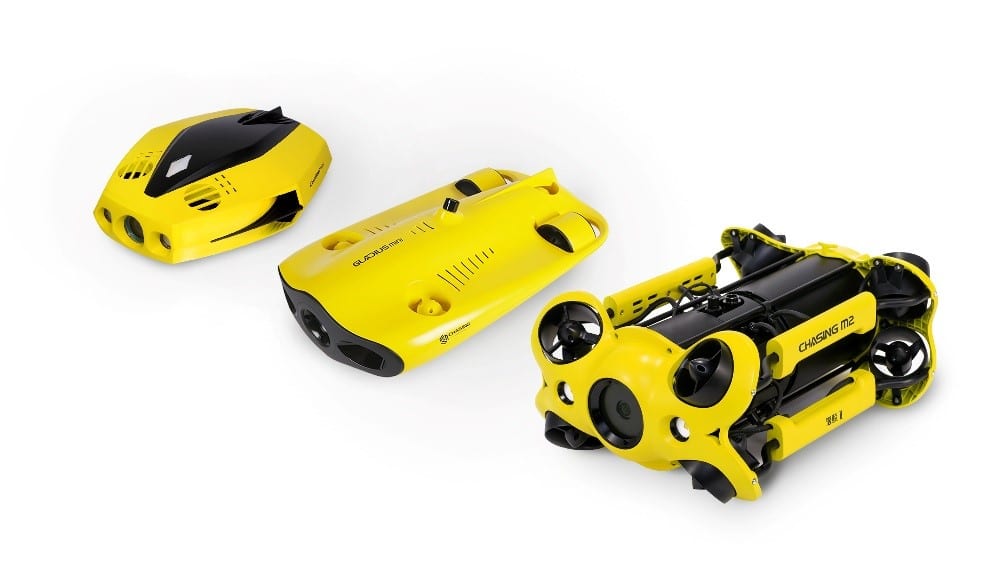 The main components and principle of operation is similar across the fleet. Standard hardware consists of a battery powered drone, a detachable tether (quick-connects at both ends), a base-station and a remote controller with a mount for your cell phone or tablet (iOS and Android).  For the M2 the base station is combined with the remote controller. 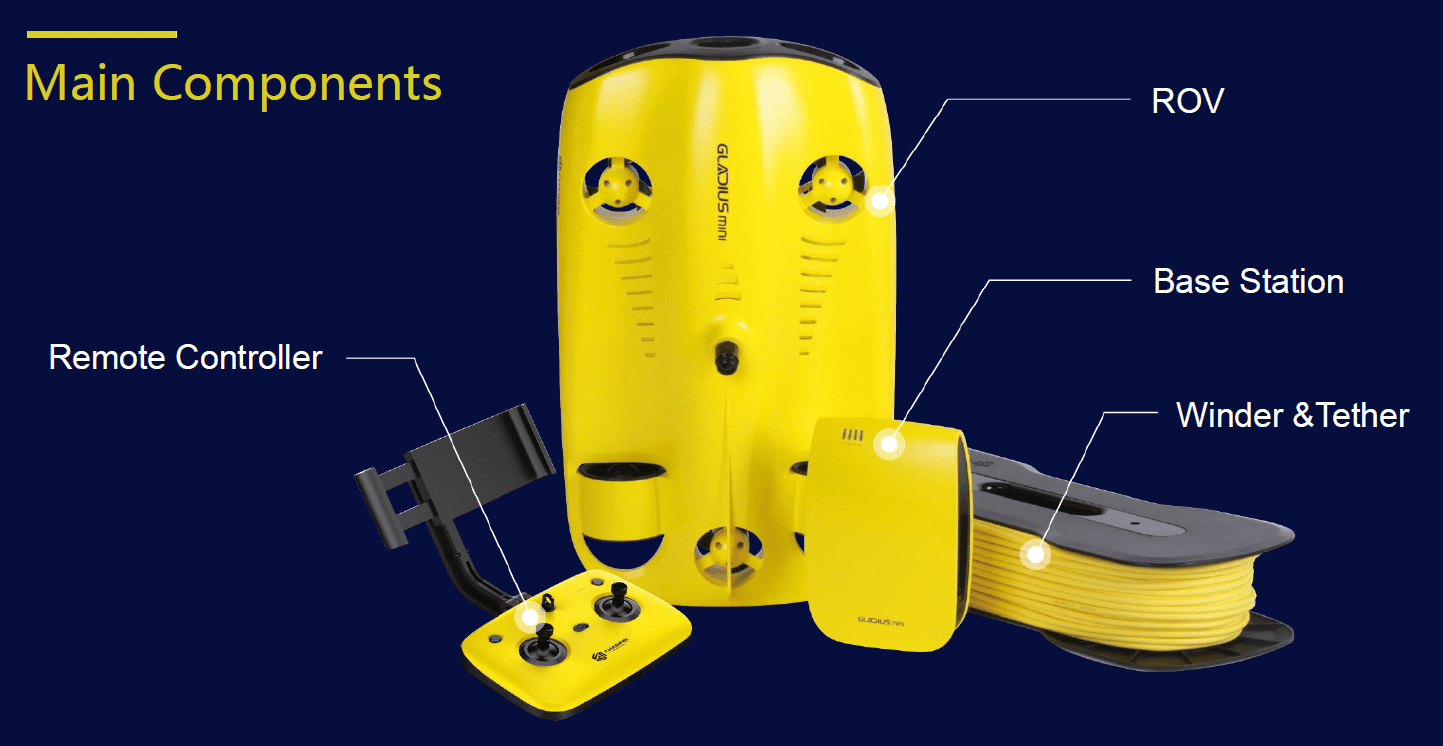 The Gladius Mini can be ordered with either a 50 or 100 meter tether/cable that is wound on a rectangular reel. The tether cable must be manually played out as the drone is deployed and manually coiled again when it is brought back to the user/surface.

Chasing has also designed a very nice custom backpack with compartments for the Gladius Mini and all of the accessories.

The Chasing M2 is a professional series drone with a compact, alloy aluminum body and includes eight, vectored thrusters allowing omni-movement. The ability to move laterally is a great benefit for surveys along features such as dam or tank walls. These thrusters employ a unique, patent-pending “anti-stuck” technology greatly minimizing the probability of getting the M2 stuck in sand, allowing operation in all kinds of environments. 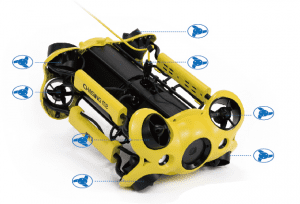 The M2 allows for different industry needs to be met with sophisticated attachments. These optional attachments include a robotic claw, a laser scaler, and third-party accessories such as external LED’s or a GoPro camera.

Another very useful accessory for the M2 is the automatic cable tether winder. This accessory feeds cable out and automatically takes up slack cable as you surface so you can reduce the possibility of tangles and knots. The M2 can be ordered with a 100 or 200 meter cable allowing for 100 meters of vertical dive and up to 200 meters of horizontal radial movement. 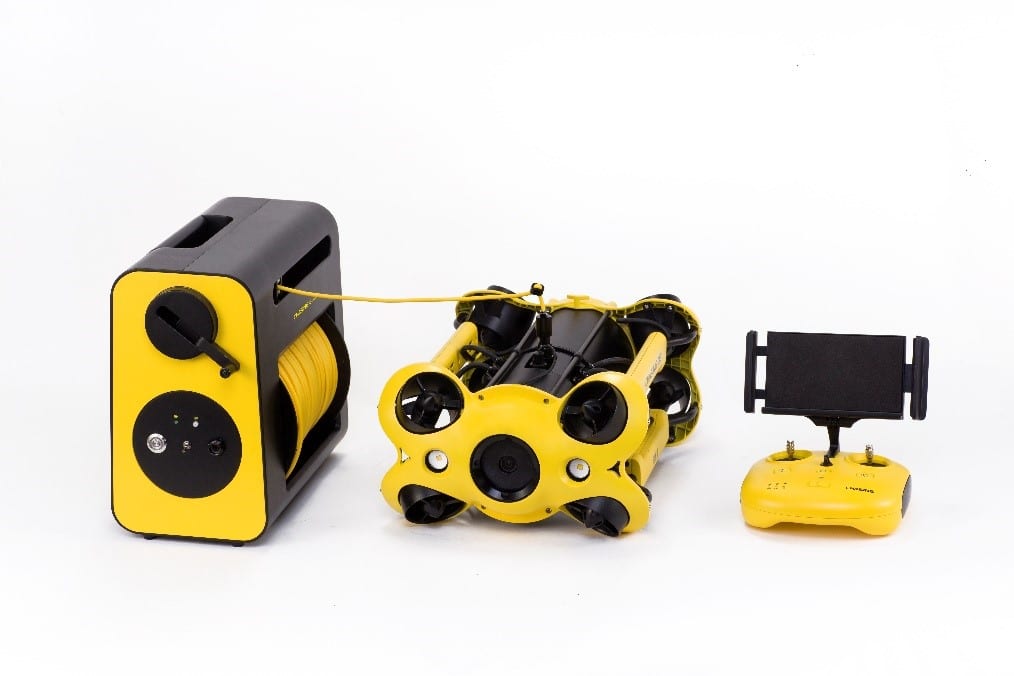 The M2 also comes with a removable 64G SD memory card and users can add up to 512G cards.

The two joy sticks on the remote controller can be programmed for individual preference. No matter how it is programmed one joystick is used for ascending/descending and the other for left/right, and forward/reverse.

Data on the Chasing app shows you the depth of the drone, the temperature of the water at the drone location, and the direction/heading of the drone on a compass-like view.

Icons on the app as well as buttons on the remote controller allow you to switch between video/photo, start/stop video recording or take a photo.

For search and rescue or other operations where multiple people may be involved you can connect an HDMI cable directly to the base station (remote controller on M2) to use a big screen and you can wirelessly connect up to three smartphones/tablets, one as a master device and two as slave (watch only) devices including a VR headset.

You can also register for our free webinar “Underwater Inspections Using Chasing Submersible Drones” on April 21th, 2020 at 10:00 am. This webinar will go into more detail describing the features of these two drones relative to performing underwater inspections. 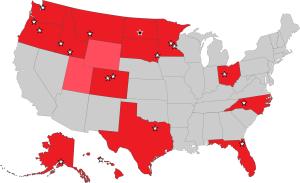